Please Note: Here all information regards eclipses for year 2020-2021 will be added. Will be updated as and when. For those interested in remedies, as to what to do when the Eclipse is in progress. Please go the section at the end.

Translation: O Ganesha, Lord of all seers, praise be to Thee; Thou art Omniscient and the unmatched wisdom of the wise. Thou art the precursor (OM) of all prayers and the Lord of all souls; we pray for Thy guidance for success in all good actions.

Eclipses has been a centre of attention since early times

Rigveda, one of the core and monumental Vedic Text written in sanskrit and comprises of over  has a lot of references to the eclipses of the Sun and the Moon. take place when they are swallowed by a demon Svarbhanu.

2800 BCE the ancient Chinese observed a rhythm in the occurrence of solar eclipses,  they believed a dragon was devouring the sun. Chinese astrologers wrote of an eclipse occurring more than 4000 years ago.  Ancient Greece

The ancient Greeks believed that an eclipse was a sign of angry gods, therefore it was thought of as a bad omen. Solar eclipses have even altered the course of human history.

The oldest known testament to people’s attempt to understand the eclipse is Stonehenge on Salisbury Plain in England. Stonehenge is believed to have been used to measure the motions of the sun and moon.

Designed to calculate astronomical positions. Recovered in 1900–1901 from the Antikythera

The construction has been dated to the early 1st century BC. Technological artifacts

approaching its complexity and workmanship did not appear again until

It is the only one to have remained a significant religious centre since its foundation . Its a Hindu temple, one of first , dedicated to Lord Vishnu. this has bas reliefs depicting one of the oldest and  one of the most famous episodes in the Puranas (500-300 BC)Samudra manthan or The Churning of the Ocean.

Bas reliefs in temples depicting various events such as battles, parades and The Churning of the Ocean of Milk, which is a giant tug-of-war between 88 demons and 92 gods.

There was a great war between the gods and the demons for the control of the universe and at the centre of it was the ocean which was being churned to find the hidden treasures and the Amrita – the nectar of immortality.Svarbhanu demon snakes, drank the nectar of immortality secretly. The Sun and the Moon complained to Lord Vishnu, the creator of the Universe, who was very angry at this deception.In anger he threw the a Chakra (Discus) at Vasuki and cut him into two. Thus the head part is Rahu & tail became Ketu. Some puranas attribute Svarbhanu the demon snake, by other names. It did result in that having drunk some of the nectar,  was immortal, therefore could not be killed.

He remained in the skies as Rahu (the head) & Ketu (the lower half), a permanent reminder to the other planets(gods) of the darker side of life which we have to defeat in the pursuit of immortality.

Together it shows darker side of our nature which we need to overcome. Rahu-Ketu gets our inner emotions churning much   like the ocean being churned. The conflict between our attachment to materialistic achievements (domain of Rahu) and liberation of the soul, finding bliss and tranquillity which is eternal and everlasting (Ketu is the significator for spiritual realisation). 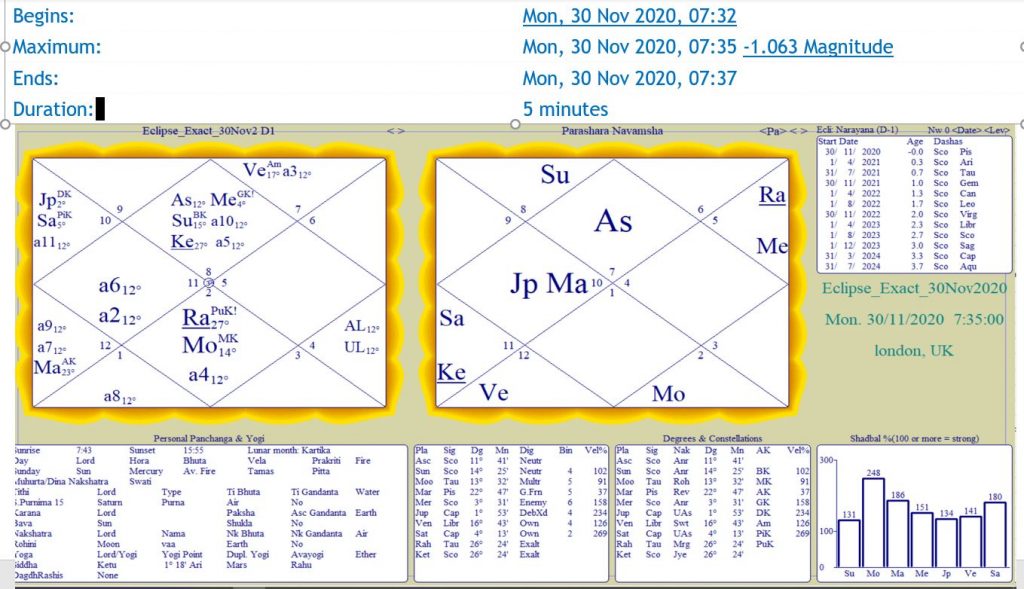 In The Lunar Month of Kaartika – As the Lunar Eclipse (Full Moon ) is in the Kaartika. Moon is in the Nakshtra of Rohini and is Vargottama Degrees. A very powerfull Lunar Eclipse.

Penumbral eclipse of the Moon occurs on Monday 30 November, 2020 UT, lasting from 07:32–11:53 UT. This subtle penumbral eclipse eclipse may be visible to a skilled observer at maximum eclipse.

83% of the Moon’s disc will be partially shaded by the Earth (none of it will be in total shadow), which will cause a gentle shadow gradient across its disc at maximum; the eclipse as a whole will last 4 hours and 21 minutes. The Moon will be visible from east Asia, Australia, and the Americas.

The timings of the eclipse are as follows. You will be able to see the eclipse if the Moon is up as seen from your location; but note that this penumbral eclipse will be very difficult to see in practice:

The timings of the phases of the overall eclipse worldwide are as follows. In any particular place it would have been seen for a significantly shorter duration as the shadow moved across the Earth: 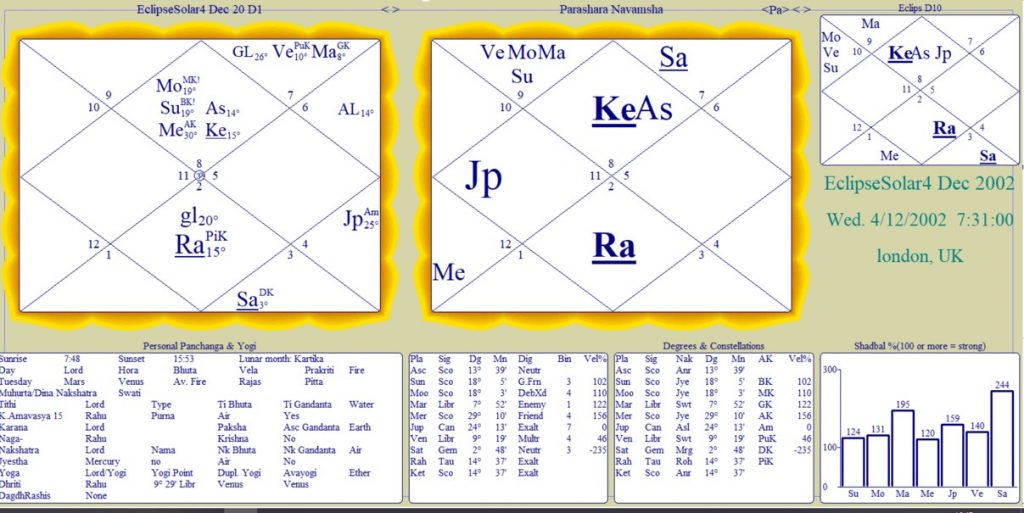 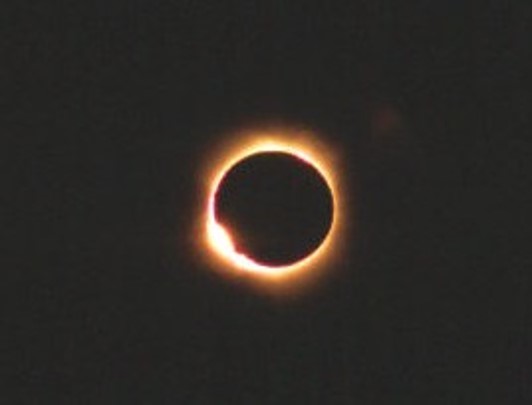 belongs to the the Same Saros of 142.

Both of the Eclipses were in Jyestha – In Sidereal Scorpio.

If when in the sign of Scorpio (Vṛścika), the people of Udambara, of Madra, of Colā and of Yaudheya will all suffer miseries along with soldiers armed with poisoned weapons.Brhat Samhita of Varahmihira 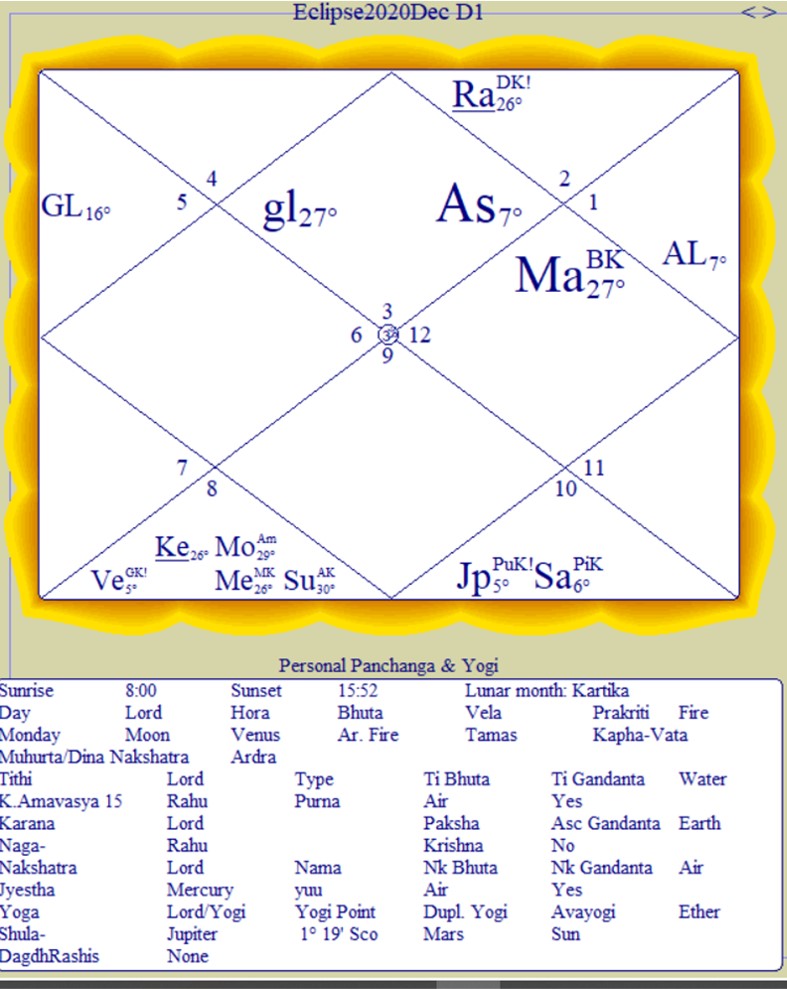 On April 9, 2003, just three weeks into the invasion of Iraq, U.S. forces pull down a bronze statue of Saddam Hussein in Baghdad’s Firdos Square, symbolizing the end of the Iraqi president’s long, often brutal reign, and a major early victory for the United States.

Dramatic images of the toppled statue and celebrating citizens were instantly beamed around the world. With Hussein in hiding and much of the city now under U.S. control, the day’s events later became known as the Fall of Baghdad.

“Saddam Hussein is now taking his rightful place alongside Hitler, Stalin, Lenin, Ceausescu in the pantheon of failed brutal dictators, and the Iraqi people are well on their way to freedom,”

Honoured with many awards, Klein has won the Coty Award in 1973, 1974 and 1975 and was awarded the Council of Fashion Designers of America Award for design in women and menswear in 1982, 1983 and 1986. He also received the CDFA in 1993 for both women and menswear, and in the same year, the America’s Best Designer.

In 2002 the company was sold to Phillips Van Heusen Corp. However, Calvin Klein as a designer personally is known for his simple, modern designs, an urban style of sexy, clean, minimal and sophisticated clothing.

Rule 9: Two consecutive eclipses of the Moon and Sun normally occur within a month. If the solar eclipse were to occur at the end of the pakña (fortnight) after the lunar eclipse, then the people in general tend to become unruly and unjust and couples quarrel and divorces/separation increases. In the reverse i.e. the lunar eclipse occurring after the solar eclipse, the Brahmins and priests increase their prayers and people are happy and contented. Brhat Samhita – Varahmihira

Reference : Sanjay Rath’s research on Eclipses : Since Varāhamihira states that this rule affects people, how it will affect individual people can be studied from their natal charts as well. For those people where the eclipse is occurring in the same nakṣatra (or rāśi) as natal Sun, the above rules would imply that the occurrence of two consecutive eclipses (one solar and the other lunar) would set them on either a new path of

(a) separative influences causing fighting, unrest and disturbances if the lunar eclipse precedes the solar eclipse or

(b) spiritual growth, happiness and contentment if the lunar eclipse succeeds the solar eclipse.

All people who have been initiated into the Gayatri Mantra can use this time for japa (repetition) of Gayatri Mantra. For all others, inititation by a Guru in a particular  moola mantra, you should repeat it as much as possible. If no particular one is given the below ones, are very powerful way of harnessing the energy of the eclipses.

दक्षिणामूर्ति ((Dakṣiṇāmūrti)) is an aspect of Shiva as a guru (teacher) of all types of knowledge and bestower of jnana. This aspect of Shiva is his personification as the supreme or the ultimate conscious awareness, understanding and supreme knowledge.

During Surya Grahana all of us will get an impurity which is 12 hours before the the Grahana occurs. So from this time, that is 12 hours before, Refrain from eating anything, and you should remain fasting till it ends. For the elderly, sick, children, people on medication pregnant women there is a relaxation given some leeway.

Leftovers, discarded food, food kept in the fridge and consumed the next day is prohibited! No cooking should be done.

Question arises for  about certain food items which we keep for days of months. Like pickle, Ghee, butter, milk, rice etc. On these items you should put 2-3 Durvra grass/kusha/tulsi to protect it from the negative effects of the eclipse and you can use them, and they need not be thrown.

People with Moon , Lagna or Surya Sun in Nakshatra of Jyestha in Scorpio, Lagna -Moon in  Aslesa (Cancer) or Revati (Pisces) ( Mercury ruled Nakshatras), as well as Dhanista-Capricorn-Aquarius) and Chitra (Virgo-Libra) Nakshatras will have an enormous transformations and changes or karmic issues coming up.

These people born in these stars should, after their bath change to dry clothes and do one more additional ritual for protection. This is only for people born in the above birth stars and not for all. They should take fresh white piece of cloth and they need to write the below “Janma Nakshatra Raksha Mantra/slokam”

Sun is in Jyestha from (December 7th to 15th December)

Deity: Indra, king of gods, the King of Gods, who is the ultimate spiritual warrior, lord of storms 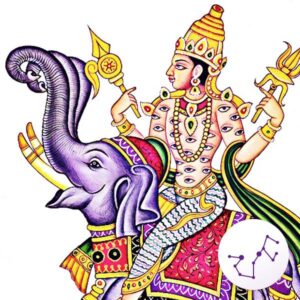 After 11 to 108 times chanting of this Janma Nakshatra Raksha Mantra, they can now start Mantra Japa of their ishta (favourite/likeable) mantra as highlighted earlier.