Eclipses of 2018 : Triggers of Fire Energy of Mars and Ketu

The word Narasimha consists of two words  nara which means man, and Simha which means lion. Together the term means “man-lion”, in reference to the man-lion is a mixed entity avatar of Lord Vishnu. He represents the Planetary energy of Mars, and hence has strong associations with yogic penances and practises and is the destroyer of ills/demons. Vedic texts often call him by Hiranyakashipudvamsa (हिरण्यकशिपुध्वंस) – the one who killed Hiranyakashipu, Nakhastra (नखास्त्र) – the one for whom nails are his weapons.

Ancient Vedic literature including the MahaPuranas have heavily used the iconography of Lord Nrsimha. Skanda Maha Purana as well as Nrsimha purana, Bhagwata Puranas carry verses and tales of Nrsimha. He incarnated as the avatar of Lord Vishnu, So he  could restore Dharma and the righteous path through penance, yogic practises and celibacy. Hence he is depicted as having the gold band around his legs to remind us of the power of discipline, focused mind and yogic body,  in order to not just acheive the the righteous path, but stay put on one’s inheret path without much deviation.

In kerala and southern parts of the India, a similar Lord Ayyappa is found(please see image below). 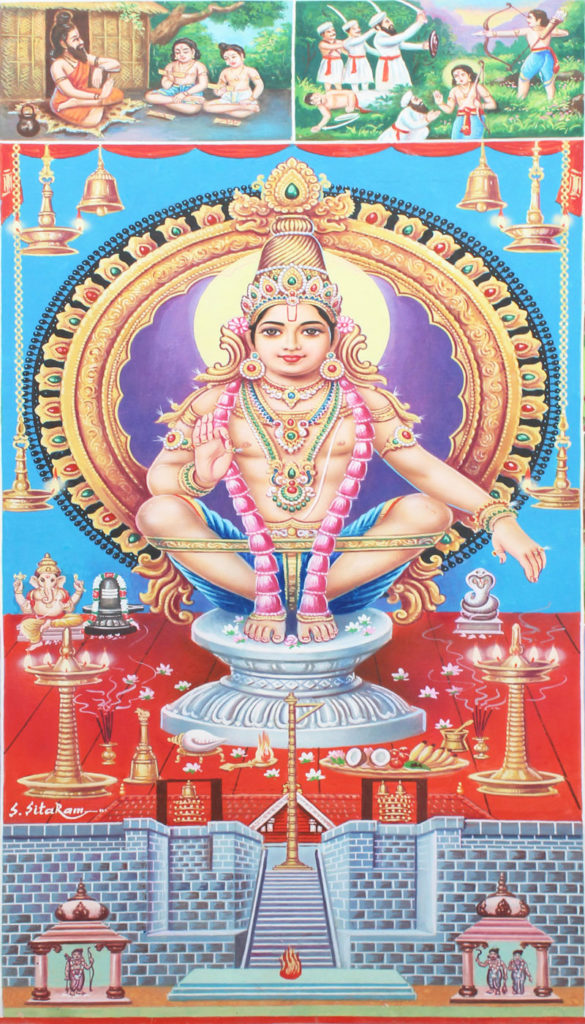 You can find a similar yoga belt with Lord Narasimha, Dakshishamoorth , Lord Skanda. They all being the avatars of Lord Vishnu as well as Lord Shiva.

Lord Ayappa of Sabrimala is also depicted with similar belt and this is iconic for the pursuit of the deep penance and yogic practises.
His pose is called”Harivarasanam” i.e Keeping both his legs and back well pressed on the ground, at the same time the spinal cord is straight. A not-so-easily do-able posture for ordinary mortals and more so if one sits in that position.

Thus the energy of Mars is very much linked with these two.

The Eclipses of Summer 2018 has a lot to do with Planet Mars as well as Saturn. The Partial Solar eclpise of July 13th 2018 as well as the inevitable two weeks down the line, Lunar eclipse of July 27th 2018 both have the build up in Makar Capricorn (in the Nakshatras of Uttarasadha and Shravana) and Cancer (In the Nakshatras of Pushya).

As Mercury has got involved and is slightly out of place in this battle of Saturn-Moon Signs. Mercury is not happy in Cancer while Mars and Ketu do okay in the signs of Saturn.

As Bernadette Brady in the book of ‘Eagle and the Lark’ states : New Moon conjoins jupiter in this series of Saros. And this conjunction sits directly on Mars-Uranus Midpoint.

“This is a difficult eclipse family, as its members bring unfortunate news. Concerning friendships and relationships.You will be dealing with ideas of seperation or ending of a union.However, Although the picture may look glum as the eclipse takes affect, the actual results are quite positive.You will quickly grasp what has to be done and fast action can bring good results. The theme of this eclipse is action concerning personal relationships.”

This is the penultimate one in the series.

People with strong signatures or planets in Mercury signs, especially Gemini (Lagna/Ascendant/Moon) will have a lot of their the inner conflict and dilemmas. As Everything about Gemini is about being in two minds, entire issues of home/relaationships and work will invariably be affected heavily. It is as if they will try resolving one aspect of their lives and the rest gets involved too in the process. Cancer, Capricorn and Scorpio (if You have Ascendant, Sun or Moon) especially in the mentioned Nakshatras) will go through unexpected transformations and life will not be the same after this !

Sagittarius Moon/ Rising gets involved too as Saturn is transiting the sign. 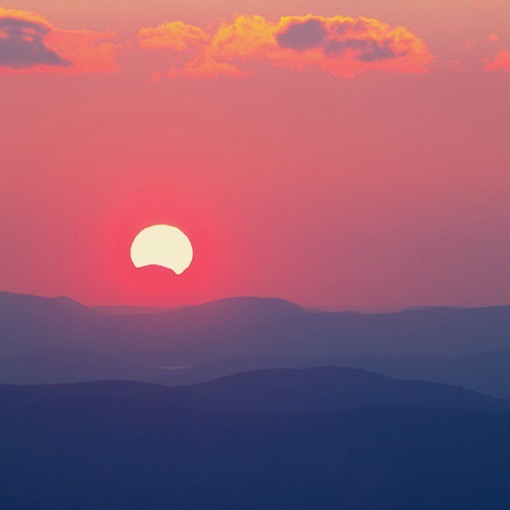 Solar Eclipse of 13th July 2018 in Gemini in the star constellation of Punarvasu. Aditi the deity, Mother of all Gods gives the ability to bring back into light and making things brigher and lighter!

Mercury and Mars inevetably get involved as they are in opposition to the Nodal Axis over the ecplise period. Mars along with Saturn, its dispositor and both being retrograde are really calling the shots. 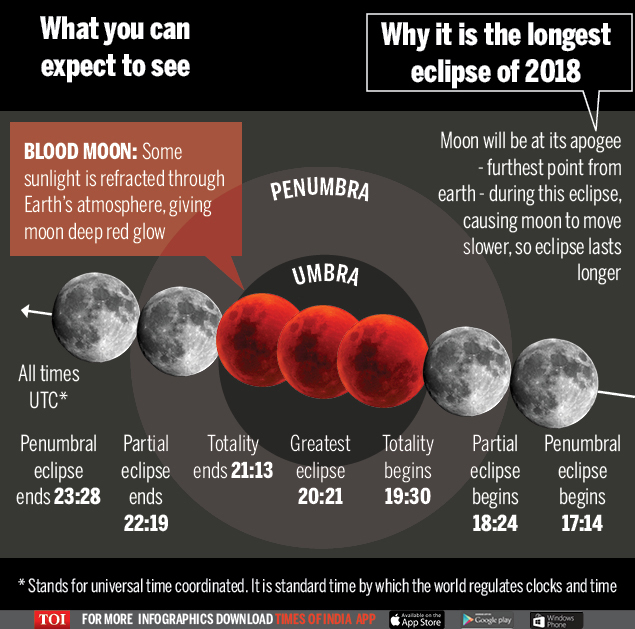 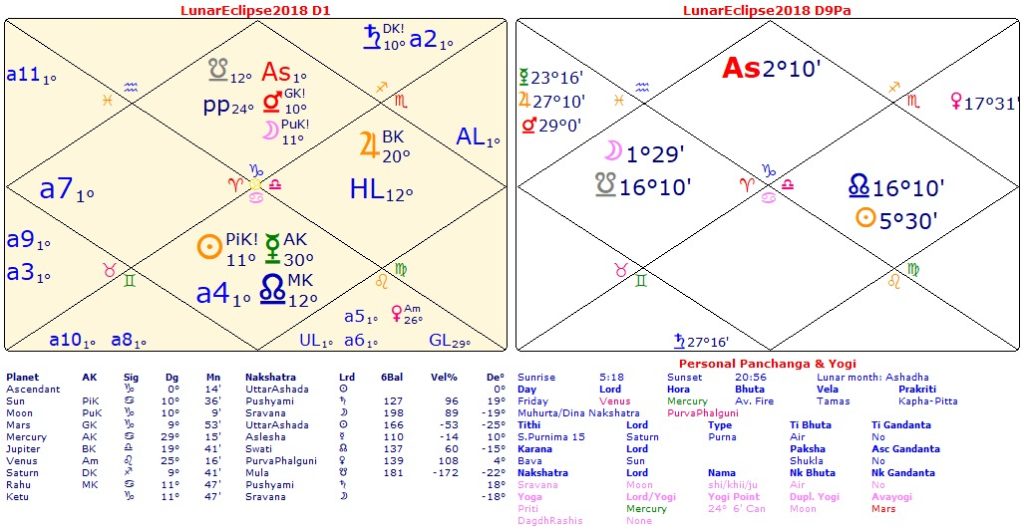 People with Saturn and Moon Ruled Ascendant in Capricorn and Cancer respectively will be affected in the the realm of Relationships, finances, litigation and all sorts of issues pertaining to it will come to the fore. Major decision in these arenaas will be avaluated or and strongly recomend to take the bull by its horns rather than keep everything ticking as usual!

Aries/Libra  Rising and Moon will have their entire 4th house of home, properties, realty and the 10th house of your work, your Standing in the world will come in sharp focus. People working in health/medical industry may do well,

Taurus/Scorpio Axis will also be affected as the entire eclipse is aspecting the signs of Taurus and Scorpio. OUt of these 2, Taurus will have an easier time in the arena of Higher learning, Teachers, Universities, Social Media and their image.

While Scorpio will struggle a little, as Rahu is in their 9th house and making Rahu not the most plesant experince in that house. Either way, both of these signs will be forced to look at themselves, their role, what they bring to the table and their role in them regards their relationships. 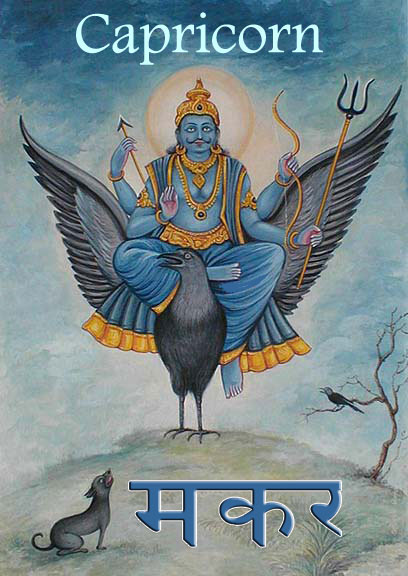 Ketu and Mars are in Makar/Capricorn, sign ruled by Saturn. People with Ascendant/Moon here will be quite vastly affected. Along with Scopio, Taurus, Aries, Libra and Leo.

Best things to soak up the energies of the eclipse is to expose your self to quiet time, be near a water body (Cancer Axis). Focus on Mantra chant which you resonate with.

Remember the energies of eclipse are potent and can work in your favour provided you work with it with humility, authenticity and reflection.

Remedy for Eclipses. 1. Find quiet places or natural water bodies or outdoor green spaces to spend time in. 2. Do not take major decisions over this time 3.Avoid eating much if you can or none at all while the eclipse is in progression. As the tithi is Amavasya, which is not conducive to the fire od digestion. Best to keep a little hydrated. 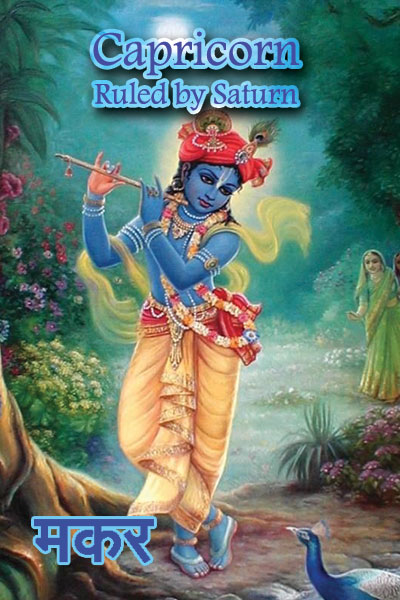