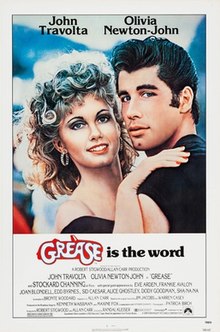 American actor, singer and dancer. Travolta probably the most famous actors, dancer of the 1970s and still recognised for his great moves in Grease as well as Saturday Night fever. (How fitting for someone with an exalted Saturn in Libra in the 4th house, it is where our heart is.)

Travolta was nominated for the Academy Award for Best Actor for performances in Saturday Night Fever and Pulp Fiction. He won his first and only Golden Globe Award for Best Actor in a Motion Picture – Musical or Comedy for his performance in Get Shorty and has received a total of six nominations, the most recent being in 2011. In 2010, he received the IIFA Award for Outstanding Achievement in International Cinema.

Appearing on the television series Welcome Back, Kotter (1975–1979) and starring in the fantastic box office successes Saturday Night Fever (1977) and Grease (1978).

These films started the artistically a trend in music and dance. His dance movements are still ‘alive’ till today. Saturday Night Fever launched Beegees and the most memorable soundtracks ‘How Deep Is Your Love” is a pop ballad written and recorded by the Bee Gees in 1977 and released as a single in September of that year.Finally used as the soundtrack to the film Saturday Night Fever! 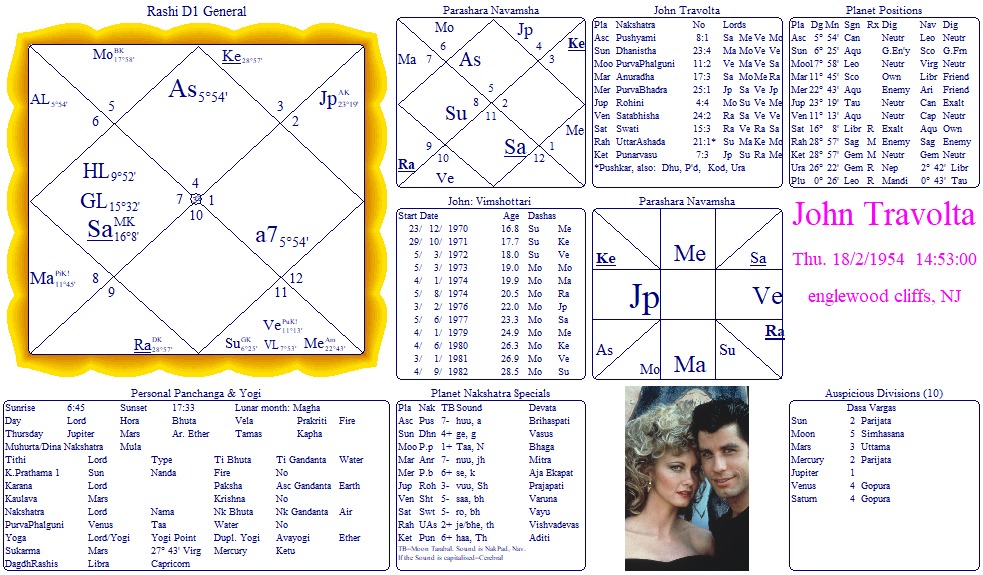 We see the Cancer lagan ascendant, and lagna Lord is Moon in 2nd aspected by Sun, Venus, Mercury, and a exalted Saturn. Thats a clear cut RajYoga. Inspite of having a Kemdruma Yoga (No Planets in the 2nd and 12th from the Moon, and from Kendra Lagna as only malefic Saturn). The saving grace is having aspects by no less than 5 planets!   the Moon is very strong, it is in Simhasaana Vaishesamsa. That is a clear power and authority, division. A great attitude to work, and his biggest successes came 1977,1978, Saturday Night fever and Grease. That was in Moon Dasa- Shani Saturn antare dasa. Both are yogada/Maha Yogada, planets, as Shani has rashi dhristi (aspects) on  the Lagna and Lagna Lord, Moon. Ghatika Lagna, Hora Lagna are with an exalted Saturn and aspecting the Lagna. Amazing! it works on the dot.

One of the worst tragedies he and his long standing wife Kelly Preston suffered was the loss of his 16 year old autistic Son in 2009. He described it as:  “It’s the worst thing that’s ever happened in my life’. Vimshottari dasa running was Jupiter, and antar dasa was Shani Saturn. Although saturn is exalted , it is a malefic and retrograde, delivering a result, given by Venus who is the Putra Karaka (Significator of Children, creativity, knowledge). Here Venus is combust, and rules the 11th house and 4th house. Both have Jupiter (another karaka for children) and Shani in the houses ruled by Venus. Plus a debilitated Rahu aspecting the Moon and ruled by Jupiter. Jupiter in the 11th as AK is very auspicious , so in spite of the loss, he eventually managed to have more children.

As he says, fail or succeed at what you would like to do, thus measuring yourself according to your standards and not by others.

A great role model of an artist! and a Karma Yogi.