Guru Purnima,Surrender to the Knowledge and Philosophy

Sri RamanaMaharshi has pointed out that ―there is no difference between God, Guru, and the Self.According to him, ‘The master is both within‘ and without.‘ He gives a push from without‘ and exerts a pull from within‘… The real guru resides within us all: ―There is only one master, and that is the Self. (Maharshi’s Gospel, 2003, pp., 26-29).

This is one of the words used and is bandied around, quite a lot. Yet, it is not entirely gimmicky! In the new age sense, we grasp intuitively that it refers to a single universal consciousness. Really, what does it mean? How can my thoughts, feelings, and turbulence affect you and people living on the other end of the Earth? That is preposterous!

All Thoughts invariably and eventually will lead us to into action. All actions perfomred will affects us all on a cosmic and ‘global’ level. We have woken up to the COVID situation, as what happens in one part of the world will invariably come to affect the rest of us.This idea of one consciousness is now relevant more than ever.  We are not disparate creatures, living on an island, a law to ourselves. We are not built that way! My pain is your pain, you laughter is mine and my angst is as much yours, as it is mine. So when you are in anxiety and despair, I am too. We have to wake up to this very fundamental truth of one consciousness.

The Rishis Sages have referred this truth in Vedanta all along. Forms the basis in all Vedic Scriptures including the Vedanta. This they refer to the  single,ultimate,unified consciouness which is the Brahman. You can call it source, creator, Shiva, Narayana, Jaganath. It is essentially emanates from a singular One ultimate truth consciouness.

Our phenomenal existence is spoken of as illusory—like the horns of a rabbit–as manomaya, i.e., of the nature of mind. The Greatest of Vedanta Guru, Sankara invokes the concept of ―maya” which literally means that which is not Sanskrit, ma is not ya refers to ‘that’ ―Ya ma samaya – that which is not there, that is Maya. Maya is the Grand Cosmic Illusion—the mother of duality, Created by Shakti.It is everything, our 5 indriyas or sense organs perceive. She is the Matrix, the veil of this World which we are caught up in.

On account of which one appears as many and the real appears as unreal. Maya is responsible for the appearance of our changing, variable and colourful Universe.

In the first part of this mahavakaya,Brahmsatya, the reality of  the reality of Brahman consciouness is upheld, and is the only reality.Brahman (Universal Self) is the sole reality.

Second part of this mahavakaya, the reality of phenomenal world is denied. The world which is nothing but Maya is illusory. It is the Matrix under which we are toiling under and experincing all the pain and pleasures and engaged in the five senses. This is JagatMithya.

In this part, jivobrahmonapara, Individual Self Soul(Atman) is not apart from Brahman, the identity between Brahman (universal Self) and Atman (individual Self) is established. In other words, the world as perceived by our senses is ultimately unreal. The world is unreal not in the sense that it does not exist per se—In the sense that it does not exist on its own, apart from Brahman/SHiva/Narayan, the ultimate reality.

Thus the goal of all our learning and knowledge is for reaching this state within us, to the realizations of what is real in this world and what is not.

I wil leave some of my favourite quotes from various sources along with first couple verses of Dakshinamoorthi Stotram of Adi Shankaracharya. 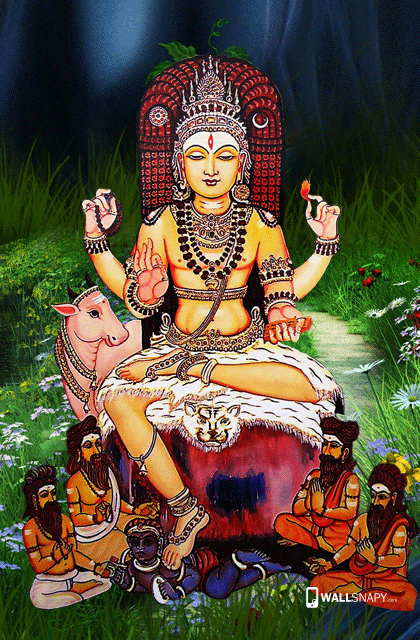 I praise and salute that Dakshinamrthy,Who faces the south,Who explains the true nature of the supreme Brahman,(Whose Exposition through Profound Silence is Awakening the Knowledge of the Supreme Brahman in the Hearts of His Disciples; )

Through his state of silence,Who is young in looks,Who is surrounded by disciples who are old Sages and Great Sages who are Devoted to Brahman.

Who is the greatest of teachers,Who shows the Chinmudhra by his hand,(gesture of the Knowledge of Brahman)

Who is personification of happiness,Who is in the state of extreme joy within himself,And who has a smiling face.

The world which is outside us is same as our soul but we see them as different entities due Maya, our veil of Matrix. As soon as we wake up, we realize that the dream is false and even while seeing our image in the mirror, we know that we are not seeing us in the mirror but our image. When we get knowledge from the guru we are in the wakeful state without the veil of ignorance.

In the first and last verse of NirvanaShtakam, Sankara conveys his realization of the ultimate truth  as follows:

I am neither the mind, intelligence, ego or memory, Neither the ears nor the tongue, nor the senses of smell and sight; Neither ether nor air, nor fire or water nor earth: I am Eternal Bliss and Awareness—I am Siva! I am Siva! ~ Six Stanzas on Nirvana, Nikhilananda, 1987,

I have neither dualities nor shape or form; I am present everywhere and pervade all the senses; I am always equanimous; I am neither liberation nor bondage; I am of the nature of Pure Consciousness-Bliss-Absolute, I am Shiva, I am (verily) Shiva. (Reddy, 2007)

← Solar Eclipse of June 2020 – Intense Purging of the Collective Unconscious angst
Nodal Axis in Taurus-Scorpio: From Bhogi to Yogi ! →

1 comment for “Guru Purnima,Surrender to the Knowledge and Philosophy”