MahaShivaRatri-Ode to Shiva, Chant & be Merry 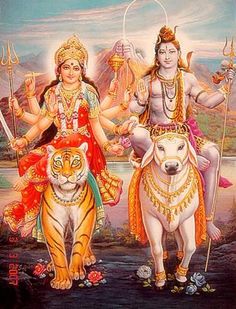 One of most important festivals in the Hindu pantheon, Maha Shiva Ratri literally means the night of Shiva. In a way, shiv ratri are dotted 12 nights a year, (coinciding with the 12 Zodiac signs Rashis a year, which is Sun’s journey through all the 12 rashis’s). Yet the one which is in early spring, on the New Moon day in the Maagha, the 11th month in the Hindu calendar, is when it is Shiva’s favourite day.

Different parts of in India, have their own take and it has rightfully evolved to local myths and legends and vedic cosmologies which go back to the Mahapuranas, the Samhitas and the Upanishads. Suffice to say all agree that the root cause for this very auspicious day recalling Lord Shiva is to raise our level of consciousness and awareness to a great extent and ultimately leading to moksha or the great liberation or what Buddhists may say Nirvana.

All ancient spiritual knowledge of India, coming down from the Vedas, has at its root, a deep-seated drive towards self-realization. To the uninitiated it may sound like talking in bumper stickers! Looking deeper in Vedic Cosmology, lies the inherent idea that human consciousness and human beings are vibrational energies or consciousness.  Thought vibrational energies shape us. We resonate at certain frequencies that alter and transform with our reactions, psyche and interaction with our environment. Basis of all human existence is consciousness and vibration.

Vedic Sages were very clear on that the human consciousness is just not a random idea but there is an intelligent and cosmic ordering in form of multi universes and sophisticated consciousness that comes with it.

It is said, of Lord Brahma, the creator of all the universes, that in the blink of an eye, millions of human lifetimes passed before his eyes. This gives us the idea of the enormity of our universe and our place as human beings. It also gives us a very fundamental idea that have lived for ever, in this the cycle of life and birth. Just changing our external forms. Hence our soul mission is to burn away as much Karma accrued for those millions of lifetimes and gain freedom from it all.

Nature of Time and the Age of Discontentment

We are currently in the fourth phase of the ‘Kali yuga‘ literally means ‘Dark age’. We are stuck in this era of time for about 1000 divine years or equal to 432,000 earthly years! So, what does it all mean?

Route to bliss and enlightenment in Kali Yuga is by going through the eye of the demonic storms of human darkness and conflict. 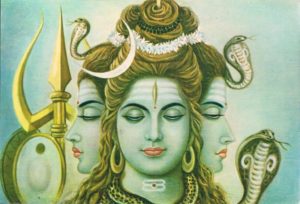 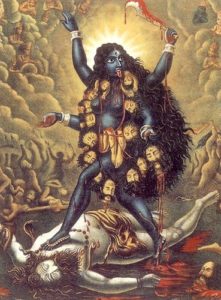 Samudra Manthan or the Churning of the Ocean Floor for divine nectar is central to the Vedic texts such as the Vedas and the Puranas and its cosmology.

The episode of the Churning of the ocean floor is mentioned in quite a few of the Mahapuranas, including the Kurma, Brhmavarta, Vishnu, to name a few. 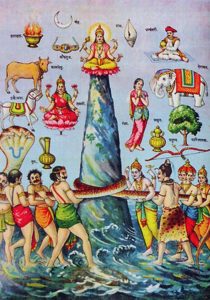 Lord Vishnu as Kurma, the celestial tortoise is Central key figure, sits at the bottom of the mount Meru, sits Kurma in the form of the turtle offering stability to the whole episode of the churning of the ocean floor for milk-nectar.

Samudra Manthan or the great Churning of the ocean floor for nectar came about between the Devas, celestial angelic being and the Asusras, the demigods. The Devas in Vedic are akin to the angelic beings and the Asuras are like the titans in the Greek Mythology.

Asuras or demigods, a group of malicious deities in the Hindu pantheon, were gaining power over the angelic Devatas. Despite the Devas fighting bravely and being successful, they felt threatened and went to Lord Vishnu for help. Lord Vishnu, the sustainer of the universe advised the Devas if they were to collaborate diplomatically with the Asuras and churn the floor of the ocean to extract Amrita, the nectar of immortality. The nectar would bring them immeasurable powers of knowledge, untold abundance, wealth, fortunes and eventually immortality.

Needless to say, when they began their collaboration with the Asuras, and the Serpent King Vasuki, they withheld this divine secret.

The churning began, with the Devas on one end of the serpent King Vasuki and the Asuras on tail end.

The mountain Mandara that was used as the churning rod, began the process vigorously, as a result the ocean floor began to sink down…. At that point, gallons of poison called Halahala, or was produced from the ocean. This terrified the devas and the Asuras, because the poison was so toxic that it could wipe out the entire manifest creation.

On the advice of Vishnu, the Devas sought Lord Shiva for help and protection. Out of compassion for the living entities, Shiva drank the poison, which was so potent that it changed the colour of Shiva’s neck to blue. For this reason, Shiva is also called Neel kantha, the blue-necked one, Neela means ‘blue’ and Kantha means ‘throat’. 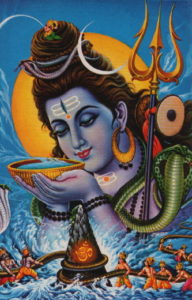 For this reason, there are some very powerful Vedic Mantras of Lord Shiva used for healing of physical ailments and mental health issues, as he alone has the power to take away the toxic poisons generated by our psyche.

Hence the importance of finding that space within us, the ‘Shivatva’ where we can access Lord Shiva, and break some of our deeper darker recesses of our psyche.

Eventually, after all the terrible poisons, 14 different treasures came out. Vasuki, the king of serpents became immortal thus splitting into two, Rahu the North Node of the Mood and Ketu, the South node of the Moon by the discus of Lord Vishnu. They had consumed a small portion of the nectar of immortality, hence they will forever remain alive for as long as human beings exist. They are a constant reminder of greed, covetous nature, part we cross boundaries, we go out of our way, our darker side as Rahu, and the other is Ketu which is like a laser beam, focused towards moksa and spirituality and being a ascetic wanderer.

Some of the other treasures that came out were :

Uchhaishravas, the divine seven-headed horse of the Sun God came out.Airavata, the pluritrunked elephant, Kamadhenu, the wish-granting cow; Parijat, the perpetually flowering tree; Shankha, the magic conch making the celestial sounds; the Sun Surya and the Chandra moon; Dhanavantri, the Sage of Ayurveda came out.

All this was the result of churning the ocean of milk.

Subconscious and its connection to the much-ignored Rahu-Ketu

The same subconscious mind, or the darkest deepest demonic forces, lurking within us, were known by the ancient Vedic Sages. The Vedic myth of ‘Rahu-Ketu’ is fundamental to the creation of the universe and epitomizes the very reason-de-etre of our existence. North node of the Moon (Rahu) and the South node of the moon (Ketu) form fundamentals in Jyotish (Vedic Astrology).

It is the reason for birth, Life and death itself. It is the manifested as well as the unmanifested reality, it is Maya, or as Buddhists call ‘Samsara’.

Combined with the Saturn, Mars and Rahu-Ketu, sums up the spiritually abysmal of Human existence through suffering, cheating, mental anguish, mental illnesses and all the ills and afflictions one can imagine.

Vedanta & Vedic scholars, Yoga enthusiasts and experts alike, religious priests, Hindu scholars or die hard Hindus will all agree that this is a special day of Lord Shiva and one can achieve great beneficence  punya, whether this lifetime or next through meditation, chants, fasting, all day and night kirtan at the local temple, or just being in solitude and reflection.

As sound is one of the most fundamental building blocks of the universe, the sounds that resonate with your Nama Akshara – The sound of the first letter of your name or your Moon Nakshatra or the sign of your Vedic Moon Constellation/ Fixed Star.

For example, if your name is Romaine, then either you find your Moon Sign Nakshatra (https://circleofdivineastrology.com/your-planets/) or check in the table below, first Nama Akshara is ‘R’ which is in the nakshatra of Dhanista. The other sounds associated with Dhanista are ‘ya’. So, you have option of Ya or Ra. Your meditation chant will be

These sounds will be excellent! And you could find a Mantra for Lord Shiva that begins with ‘R’ or ‘Y’.

Finding the Right Sound for based on your Vedic Moon Sign

To find your Moon Nakshatra, Sun as well as your Ascendant Nakshatra please visit https://www.circleofdivineastrology.com/your-planets/)

It will be one of the 27 Nakshatras. Read the sound for that Nakshatra and add ‘AM’ to it. For instance, if your Moon Nakshatra is Punarvasu, sounds associated with it are ओ (o) and
औ (au). So, adding, ‘Am’ to those sounds we get Om and Aum.

That sound Om, Aum will provide untold benefits for your wellbeing and will guide you when you fall into rough times.

It can be combined with pranayama or on its own taking a few minutes off a stressful day. Better still to incorporate these sounds with your early morning meditation.

By My traditional teacher of Advaita Vedanta

On the importance of Meditation Chanting and Japa